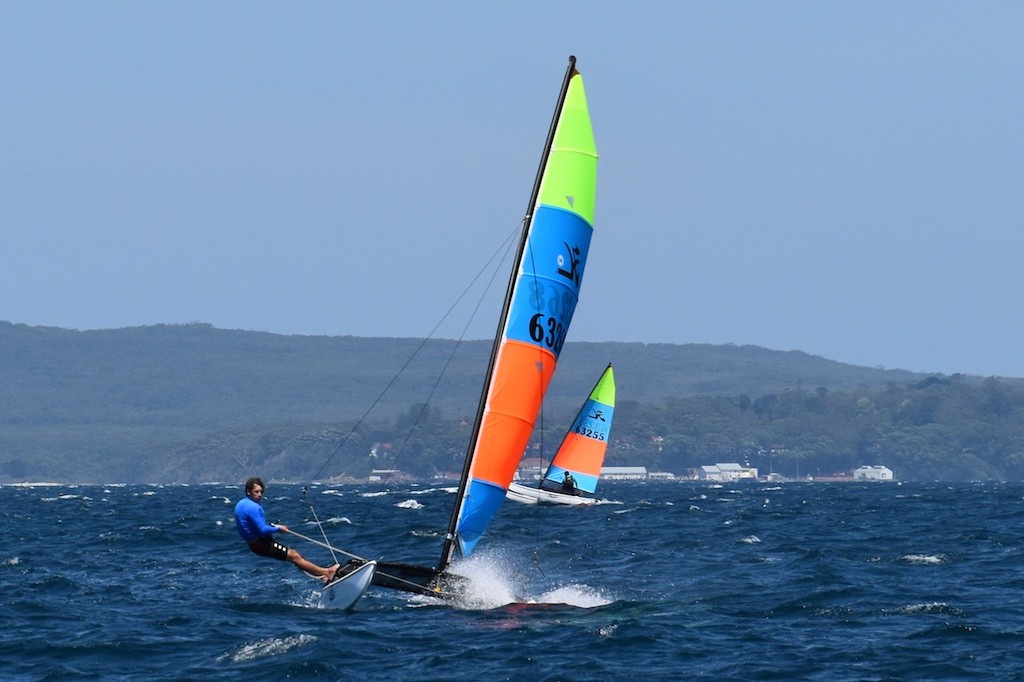 A fleet of 18 Hobie 14s lined up for the first H14 Nationals in 17 years. The competitors ranged from Hobie “Die Hards” sailing boats that cost from $0 – $1000, borrowed boats through to brand new boats. Almost half the fleet are women! Favourites Fletch & Georgia Warren-Myers (3rd and 2nd in the recent H14 Worlds) had some very serious competition from former H18 World Champion Brad Sumner – back after a long break from sailing, and a strong challenge from Gordon McGillivray who hasn’t been on a 14 for over 10 years.

“Saturday Night” at “Royal Vinnie” was one of the best family nights you could have at a regatta. Event sponsors ordered 55 pizzas for the exhausted crowd, and the entertainment was provided by the band PANTs – which included Hobie sailors Pat Butler and Nick Eastment.

The Youth fleet was won convincingly by Will McKenzie and Pat Butler, with 4 firsts, and today in the lighter breeze – 4 seconds. Kyle Fortier and Bonnie Butler leapfrogged Kyles older brother Tait, and young crew Saxon to take second. It was such a shame that the (convincing) winners of the Australian Youth Championships – Lachie and Ethan White, were not here to shake things up! With 7 youth teams at this event, we hop to see this division continue to grow at both Queensland Youth Week, and the next Hobie Nationals – also in Queensland.

The results in the H16 opens showed one thing – if you don’t have a McKenzie girl on board at Jervis Bay, the podium is not for you! Andrew and Helen McKenzie finished on top, Upu Kila and Amanda McKenzie in second and in third a flying Pat Eastment sailed a solid regatta with Georgii McKenzie.

A highlight of the Hobie 16 classes was the young crews, several in their first regatta. Noah Skewes and Hayley Fisher – both 9 surprised all with their amazing effort in the big blow on saturday. Saxon Perry – 12, made it to the podium in the youth fleet, and Emily Fatches – also 12 made sure skipper Scott had a great weekend, and finished all but one race. If these kids are the future of Hobie sailing, we have a lot to look forward to.

Special thanks to our awesome sponsors, Totally Immersed Watersports and Hobiecat Australasia