Since the Summer of 2019, the NSW Hobie Cat Association have been attempting to hold a State Championships down in the deep south in Twofold Bay, Eden. So finally, at long last, we got it done.

Over the three days of racing, three blustery races were held on Friday, whilst both Saturday and Sunday were met with glorious Nor-Easters, where the Hoops pulled off four races a piece in spectacular fashion.

Firstly however, we’d like to acknowledge all the hard work put in by the volunteers from the Twofold Bay Yacht Club, members of the Vincentia Sailing Club who provided rescue vessels and rescue boat support, Hobie Cat Asia Pacific for providing us with some epic trophies, and finally all the members of the Hobie Family who made the trip to Eden. 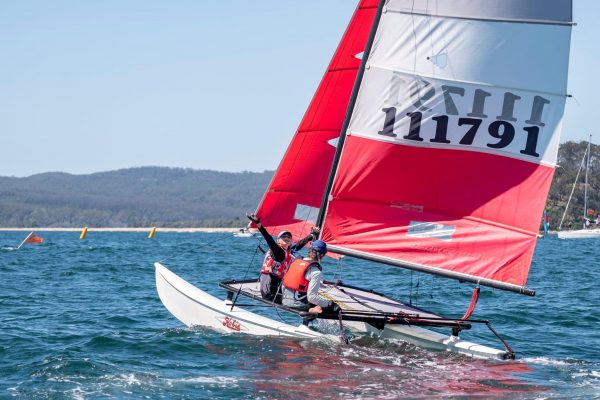 After the first day of racing on blue waters of Twofold Bay, it was extremely tight across the fleet with a singular standout sitting high on top of the hill.

Ex-Hobie 16 World Champion, Mick Butler and the infamous Torquay local, Mads Gillard, were sitting out in front with 3 bullets after the first day of racing. Close behind were the Fishers, Dave and Hayley, in second, while closing out the podium on equal points was the VIC powerhouse, Geoff Rowdon and Rosie Phelan. With a drop and a cheeky, late sea-breeze scheduled for the second day of racing, it’s all up in the air how results will pan out as of this afternoon. 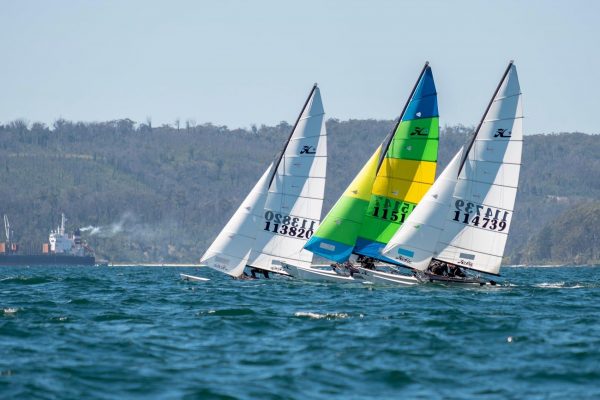 Day 2 of racing gifted our Cowboy Sailors with a 10-15knot Nor-East Seabreeze that provided what was some of the most tight and competitive racing our Cowboy’s and Cowgirl’s have seen for a long time. The winner for the day was clear to all, with Gav Luxton and the young Vincentian Jimmy Winchester reeling in three bullets out of the four races held.

Notable standouts included the dynamic-duo, Fletcher and Georgia Warren-Myers, who proved once again that consistency is key, as always, whilst Dave and Hayley were hot on their heels. However, MB and Mads still held the lead with a single point over the aforementioned lethal Victorian. As such, it was all on the line heading into the final day of racing.

Geoff and Rosie, The Big Mac and The Coach give their input on Day 1 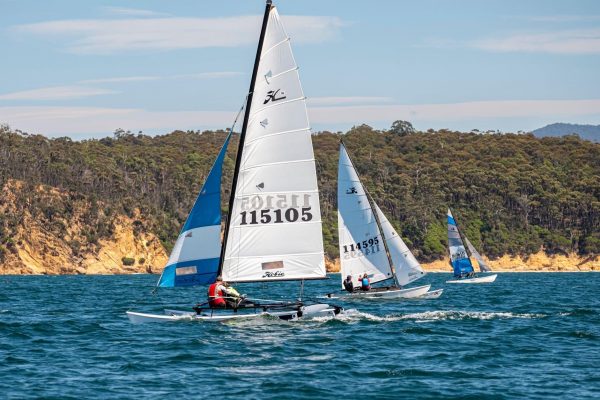 As the sun rose over a very dusty crowd of mariners, after what was a fabulous night on the cans and a spectacular meal put on by the sensational volunteers at the TBYC, our sailors were met with a glassy Twofold Bay that was in deep-preparation for a bellowing Seabreeze scheduled for later that morning.

After three highly enjoyable hours out the water, Hooper smashed out four spectacular races that led to a number of swapping and changing of positions. With a mere couple of points separating a number of the Hobie 16 teams, our on-shore beach-captains, Rebecca and Michelle, were pulling off what could be considered miracle work. 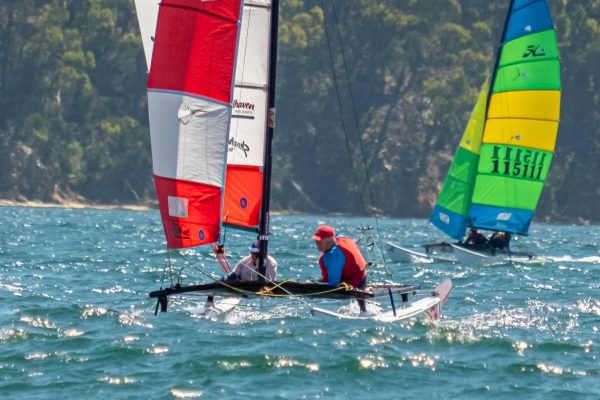 Closing out the top five in the Hobie 16s was our recently elected ANHCA President and Secretary, Campbell Weddell and Naomi Chiu, on 40 points. In fourth position on 27 points with an astonishing 4-Bullets, was our resident Water-Gypsy, Gav Luxton, and the up-and-coming James Winchester. Bringing up the podium with the bronze medal, a mere two points ahead of Luxton and Winchester were the Fishers from Palm Beach, Dave and Hayley. The Northern-Beaches pair were just shy by a single point of the reigning NSW state champions from Victoria, Fletcher and Georgia. Where finally, claiming the gold medal on 20 points, with 4-Bullets and coming off his recent win at the NSW Hobie 14 State Championships, was Mick Butler and the newly seasoned Hobie 16 crew, Mads Gillard.

Heres what Mads had to say about her experience sailing with MB:

“Thanks to the unwavering support and encouragement from the Butler fam, I was fortunate enough to jump on world-champion Mick Butler’s boat! Given we’ve never sailed together before, and we hit the water for the first race in 20+ knots, pulling three bullets out of a hat on day one really is testament to MB’s skill not only on the helm, but in getting the most out of his crew too. So incredibly grateful for your tutelage, Mick! (And patience with me, particularly when I’m sorting out my knitting as we bear away!) Being up the front of the 16 fleet is a very foreign concept for me, so to be one half of the NSW State Championships holders is mind blowing. Another brilliant regatta spent with even more brilliant people.” 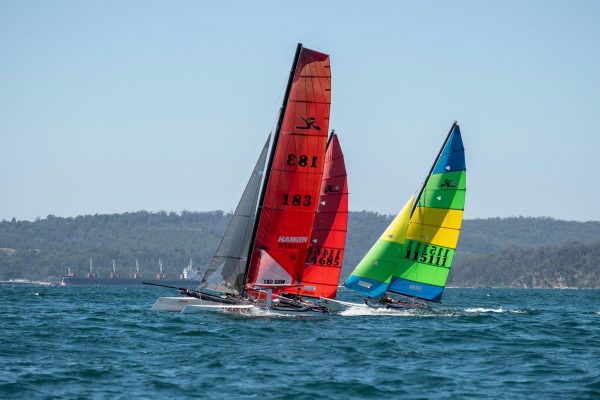 Particular standouts from the weekend included Jed Fatches and Baz McLeod on the Wildcat who had been putting on a show between the Hobie 16s. Along with the seasoned Hobie Tiger team of Peter Manley and Stefan Ochsenbein who were hot on their heels.

In the Hobie 16 fleet however, we’d like to acknowledge some of the teams that have been showing up consistently at Hobie regattas. These sailors have been travelling right up and down the eastern seaboard, building what is the greatest class of catamaran in the world. The crew at Somers, Victoria, Nigel and Abi Beddoe, Conor Greagsbey and Joey Thomas, along with Luke Crouch and Arija de Leeuw. With the Jervis Bay locals, Brian and Kerry Bates, and our NSW Secretary, Clare Eastment and fresh-faced crew Helen Mills, all displaying a consistent level of improvement over the past few seasons. 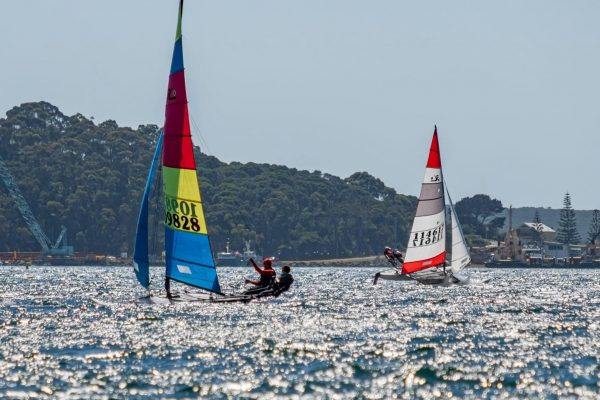 Not only that, we had a number of brand-new teams hit the water on a 16 for the first time. The seasoned Hobie 14 skipper, Zak Rowdon, jumped on the helm of his old-man’s Jervis Bay Worlds boat with the Lake Macquarie local, Ellie Knorre. Knorre, who was awarded the ‘Hobie Family’s Sportsmanship Award’ left behind her usual skipper, Arbi Watt, to make a last minute dash down the coast in the Luxton wagon. The young-gun, Bryn Robinson-Mills also raced the 16 in his first State Championships with Somers local and seasoned Dragoon sailor, Nikki Briggs. The pair not only smashed a few port starts, but carried 16kg of lead under the tramp lacing that according to Bryn, “was [redacted] upwind”.

Additionally, the Hobie Legend that is Peter “Doogie” McDougall made the trip down the coast with his 40+ year old Hobie 16, to sail with the young Vincentian, Brody Watt, in his first ever Hobie Regatta. The honourable effort from Doogie was felt throughout the fleet, especially from the Jervis Bay as they saw first hand the bloody-ball that Brody was having up the front of the boat. Lastly however, fresh over from the UK, plucked straight from the spinnaker on the Nacra 15 and the British Youth Sailing Team, was AJ Luxton, who madly and quite frankly insanely agreed to sail with the wordsmith and the kid-on-the-mic, Pat Butler.

Presentation as Captured by Dougie

So on that note, we’ll sign off and leave you all with a bit of time to enjoy some rest and relaxation, before we begin the preparation for the Victorian State Championships down in Portarlington in only a few weeks time.

Here are some shot from the shore by the team at TBYC, enjoy.